This is a screenshot from one of my home computers.  Can you guess which GNU/Linux distro I’m using.

After speaking with my friend Michael I have decided to publish another screenshot showing off the “Drives Desklet”. 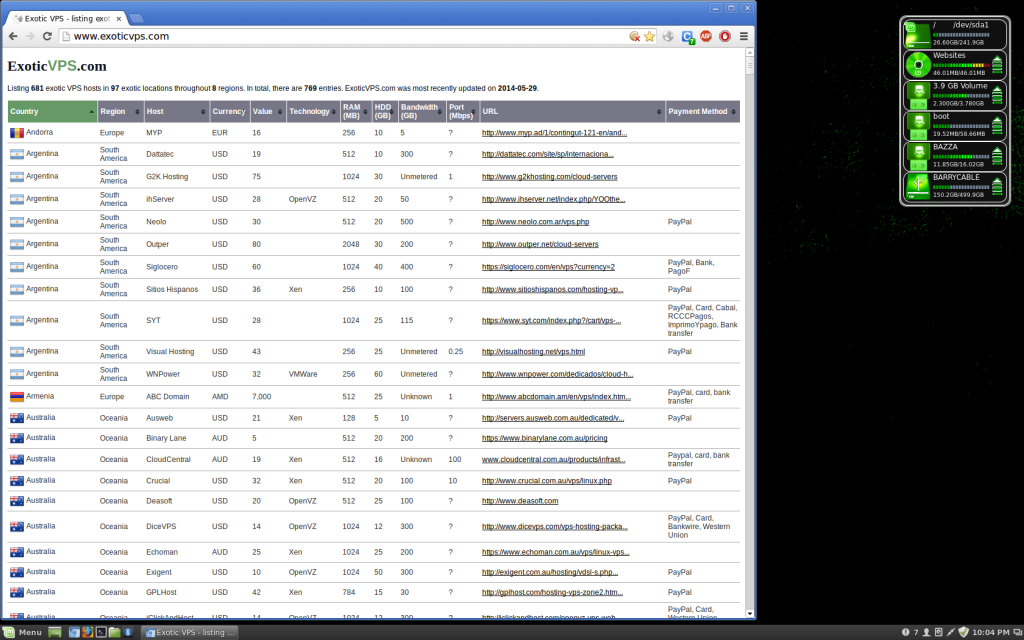 It’s official the team didn’t get a spot for the lightning carnival on Friday night.  Already had an even number of Super 8s teams.

Sarah (Riverton Football Club) did a lot of running around trying to get our team included for the lightning carnival, so I really appreciate Sarah’s efforts and give her a big thank you.

Not a problem though, we’ll be back out on the park Sunday morning for a training session at Riverton Reserve.  Should be nice and cold.

Wet and windy weather for a few days and looked terrible for training but we only had a very light shower for a couple of minutes while we trained.

Practised handball and kicking and then moved into some competive drills i.e. one on one marking and one on one just generally competing for the ball.  It was great to have six parents who could help out with these competitive drills.  The players were a bit timid at first with competing against one another for marks but gradually got better and better.

We finished training off with a scratch match – no playing in positions and everyone chasing after the football.  I don’t want to single out any players because I thought everyone trained well.

I spoke to the team (players + parents) about our team competing in a Auskick carnival on Friday night, under lights.  Everyone seemed pretty keen.  We may not be able to play because there are already enough teams registered, we need to rely on a team pulling out.

Second game of the season and everyone is improving.

Neil looked after the timekeeping duties.  Steve umpired the entire game and did a really good job which was a big effort when you consider his son didn’t even play because he was ill.   I think even the opposition team were impressed with Steve’s consistency and rule interpretations.  Thanks to my son Tim for positioning the goal posts correctly after I stuffed them up for the second game in a row.

We had 17 players so it was great that the Attadale Coach told me it was ok to put everyone on the field i.e. no interchange.  I actually knew one of the parents from the Attadale team (coached him many years ago) – his son was a very good player taking some very good overhead marks.

Damien played a good game in defence picking up quite a few kicks.  Alex tried hard all game and kicked our first goal which got the crowd pretty excited.  Matthew kicked two great goals and took some excellent marks in defence which stopped Attadale from kicking goals.  Cambell and Jayden were in the action all game, tackling and getting in hard for the ball.

Overall everyone is improving individually and therefore the team is improving.  We’re definitely not perfect there’s still lots of players losing concentration and having a chit chat and a wrestle – but as long as they’re having fun I’m happy.

Big thanks to my son Joshua for taking some great photos.

Also big thanks to the parents who helped pack up after the game.  I did see Marty packing away goal posts but I’m sure there were other helpers with collecting cones etc. that I didn’t see – Thank You.

All photos are licensed under a Creative Commons Attribution 4.0 International License.

Great turn out for training – 17 players (only 1 missing).

I was told Damian wanted to stay home and watch TV instead of train – no doubt he’ll turn up for the game on Sunday.

Handed out the new jumpers tonight. The players could pick their own jumper which would then be their’s for the entire season. Everyone was reminded not to forget their jumper for Sunday (game day) because now that they’ve been handed out I don’t have any spares if someone forgets to bring their jumper.

Steve (Coach) had a good drill to teach tackling and teach the player being tackled to kick or handball quickly. A few of the boys were getting a bit feral so it was a reminder to me to ensure we don’t let the kids get bored and keep them busy.

Everyone (players + parents) seem to be getting on well together and having fun.

A little bit of rain at the start of training but after about 5 minutes the conditions were great.

Unfortunately Campbell and Jordan thought training started at 10am instead of 9am so they both had a pretty short training session.

Had a scratch match which everyone seemed to enjoy. It worked well only having about 14 players on the field. There was plenty of open space and very little congestion so everyone had a good opportunity to get a kick and a handball without being mobbed as soon as they gained possession of the football.

A productive session – well done to all.

I got to training at about 4:25pm expecting everyone to be there waiting for me, but I only recognised about 2 players and a couple of parents. OK, we might be a bit light on for numbers tonight I thought. I started to unpack the footballs and cones from my football bag and when I looked up there were 16 kids looking at me plus about 10 parents. Only a couple missing and everyone keen to start by 4:30pm.

Everyone seemed to be in good spirits following our first game and most importantly everyone had come back for more. The parent support was excellent, assisting with the drills and also maintaining discipline when some of the players began to lose concentration (which was happening pretty regularly).

The first half of training we concentrated on skills with handballing, kicking and marking and the second half of training we split the group in half and played a couple of 4 on 4 handball games. The big thing that stood out to me during Sunday’s game was that the players lacked some confidence to compete for the ball, so we tried to give them some practice at competing for the football and then trying to share the ball and keep it off the opposition.

We finished training with me racing the entire team (I didn’t think this one through). I finished 3rd so I was pretty happy.

Next training session Sunday 18 May.

First game today and I was totally unorganised. Wasn’t sure where to set the oval up, hadn’t organised a time keeper, hadn’t organised anyone for the BBQ, forgot to bring the colored bibs (I hope the year 7 team finds the jumpers I ‘borrowed’ out of their kit bag) and didn’t do the match day player rotations (that was a BIG mistake). One thing I did do was get the keys to unlock the club rooms the night before, so I’ll give myself a tick for that.

I bumbled my way through with lots of help from Darren (time keeping), Anthony + Adrian + Tim (setting up the oval), Scott (BBQ) and Thalia (oranges & grapes at half time). Also thanks to Anthony and Alex for helping pack up after the game. Thanks to all of the parents for being supportive and positive.

Unfortunately I didn’t get to see much of the game because I was rotating players on the fly all game. We had 17 players but only 12 can play at any one time, so apart from rotating all the players every quarter so that players play in different positions throughout the game, I was also juggling 5 players on and off the ground both during quarter breaks and during the game. I tried to make sure that no one was sitting out for more than 6 minutes (half of a 12 minute quarter).

The game went over time (surprise, surprise) and we had to cut the final quarter short by a few minutes because the next game was due to start and we were in their way. A few players noticed that they’d just been rotated into the game when we called time – ooops.

The best news was I’m positive all of the players had a good time and were now looking forward to the next game. The good news is I won’t be this unorganised again.

Great turn out for our first Tuesday afternoon training session – 17 players and only 1 missing. First game of the season this week and everyone is looking forward to it. Players got to pick their match day jumper for Sunday’s game. Mostly everyone was happy with their jumper but I only had 15/16 jumpers so I’m going to have to find a couple extra for the game. The players have all been told to bring their jumpers along to the game, hopefully no one forgets.

I had to tie up about 6 shoe laces during training – why do kids turn up with their shoes laces not tied!!

Except where otherwise noted, content on this site is licensed under a Creative Commons Attribution 4.0 International License.